The Alliance for Market Solutions (AMS) board of directors and board of advisors have diverse backgrounds but share a passion for addressing climate change—they are why the organization is unique. We recently launched a series of interviews with our board members to hear their perspectives on climate change issues and why they are personally committed to addressing them. Below are excerpts from the interview with AMS Advisor John Graham. The full interview can be found here. 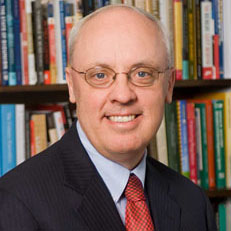 John Graham’s career includes 40 years dedicated to higher education with a five-year break for public service in the Executive Office of the President during the George W. Bush administration as the Senate-confirmed Administrator, Office of Information and Regulatory Affairs at the U.S. Office of Management and Budget. Prior to serving in the Bush Administration, John was a faculty member at the Harvard School of Public Health, where he founded the Harvard Center for Risk Analysis. After that, he was dean of the Frederick Pardee RAND Graduate School, the largest doctoral program in policy analysis in the world, at the RAND Corporation in Santa Monica, Calif. John is currently professor of public affairs at the Indiana University Paul H. O’Neill School of Public and Environmental Affairs, of which he served as dean for 11 years. Throughout his tenure in academia, he has authored or coauthored 10 books and more than 200 articles for academic journals and national publications. John has also continued to be involved in policy at a global scale, delivering invited testimony to numerous House and Senate Committees, state and federal agencies, and the European Commission and Parliament. He earned a bachelor’s degree from Wake Forest University, a master’s degree from Duke University, and a doctoral degree from Carnegie-Mellon University. John was born and raised in Pittsburgh, Penn. He and his wife have two daughters. The Grahams share interests in duplicate bridge, golf, and ballroom dancing.

The growing consensus in the scientific community, which began in the 1990s, exerted a strong influence on my views about climate change.

2. Your background is quite different from most climate advocates. How does it shape 2 your perspective on or approach to addressing the issue?

I am a risk analyst by training, and we take seriously low-probability, high-consequence threats to public health and welfare. Some of the tipping-point concerns, even if unlikely to occur, could be devastating to entire regions of the world.

The government’s role is to set the right incentives and let the private sector innovate and solve the problem. We do not need huge regulatory or public-subsidy programs to slow climate change.

The U.S. should establish a national carbon tax coupled with regulatory reform and elimination of public subsidies. This would encourage other countries to do establish their own carbon tax, an approach I favor for developed and developing countries.

5. You have met with several members of Congress to discuss climate change. What is your impression of how politicians are thinking about the issue? Their vision on climate policy?

A lot has changed since the Bush administration, during which it was easier to get bipartisan consensus around climate policy because there were fewer alternative sources of energy and an overall oil insecurity. Today, neither, especially the latter, is present. Therefore, members have very diverse views and much uncertainty about what solutions to advocate.

Among Republicans, there is an age difference—the younger the member, the more engaged he/she is in addressing climate change. In fact, my students, many of whom are conservative, are concerned about the issues. However, their parents, as well as older Republican members of Congress, tend to be more skeptical and dismissive of the issue.