The Alliance for Market Solutions (AMS) board of directors and board of advisors have diverse backgrounds but share a passion for addressing climate change—they are why the organization is unique. We recently launched a series of interviews with our board members to hear their perspectives on climate change issues and why they are personally committed to addressing them. Below are excerpts from the interview with AMS Advisor John W. Rowe. The full interview can be found here. 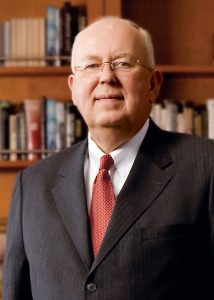 John W. Rowe is chairman emeritus of Chicago-based Exelon Corporation, which he led from its formation in 2000 through the completion of its acquisition of Constellation Energy in 2012. John previously held chief executive officer positions at the New England Electric System and Central Maine Power Company, served as general counsel of Consolidated Rail Corporation, and was a partner in the law firm of Isham, Lincoln & Beale. He also previously served as chairman of Edison Electric Institute, co-chairman of the National Commission on Energy Policy, and on the Secretary of Energy’s Blue Ribbon Commission on America’s Nuclear Future. Committed to a wide variety of civic and charitable activities, John has served on a number of corporate boards and a large variety of not-for-profit boards. He is a regent of the Illinois Institute of Technology (IIT) and is the former chairman of the Commercial Club of Chicago, the Chicago History Museum, and the Illinois Holocaust Museum, to name a few. The Rowe Family Trust has founded two Rowe Professorships of Architecture and the Rowe Chair in Sustainable Energy at IIT; the John W. and Jeanne M. Rowe Chair in the History of American Politics, Institutions and Political Economy, the Rowe Professorship in Byzantine History, and the Rowe Professorship in Greek History at the University of Wisconsin; the Rowe Professorship in Virology at the Morgridge Institute; the Curator of Evolutionary Biology at the Field Museum; and the Rowe Professorship in Ancient Egyptian Studies at the University of Chicago. The Trust also co-founded the Rowe-Clark Math and Science Academy and the Rowe Elementary School. John received undergraduate and law degrees from the University of Wisconsin, where he also received its Distinguished Alumni Award. He and his wife call Naples, Fla., home and have a son.

My interest in climate change and climate policy was driven by 28 years as an electric utility CEO, where too often the most expensive and least effective environmental measures were adopted when carbon taxes and caps and trading would be so much more efficient. I have been convinced about the importance of climate issues since the early Bill Clinton years when I supported his initial tax plan. There is no doubt in my mind that climate issues are among the most important matters facing the world, although not the only one by any means. I am interested in dealing with them in ways that are most consistent with a market economy.

2. Your background is quite different from most climate advocates. How does it shape your perspective on or approach to addressing the issue?

When I was running utilities and even after I retired 8.5 years ago, it was painfully obvious that utility companies are collection agencies for environmental policy. Therefore, one wants the most efficient mechanisms. And as the head of the largest nuclear company in the U.S., a good climate policy would have made my plants more valuable.

Government has to define the box. It must create the overall system of regulation and taxes that frame the market. The private sector is very creative when it knows the rules, or the box in which it must operate. Government should frame; the private sector should do.

As a wealthy country we should lead, but not go too far by ourselves. There is much hypocrisy around the world on climate. In 2011, I attended a meeting of utility CEOs from around the world, during which I heard: The U.S. must get on board. The problem is very real. Our countries will not meet their own goals. So the U.S. must constantly work for mechanisms in which the wealthy countries lead but the developing countries must participate. This cannot just be a wealth transfer system.

5. What is your advice for current energy industry leaders as they consider addressing climate change?

Current energy industry leaders should make their plans based on the expectation of ever-increasing climate regulation, through taxes, subsidies, and public pressure. The discount rate on carbon-reducing investments should not be too high.

6. You have met with several members of Congress to discuss climate change. What is your impression of how politicians are thinking about the issue? Their vision on climate policy?

In 2008, both presidential candidates purported to address the climate problem. Today the parties are more split, although I think members of Congress are becoming more thoughtful. But the risk is always that Republicans will do nothing and Democrats will only do the most expensive things that financially benefit their preferred constituencies.

I suspect the climate in 2100 will be a little more erratic than today, but not as bad as the doomsayers believe. The Earth is a damned big place.