The Alliance for Market Solutions (AMS) board of directors and board of advisors have diverse backgrounds but share a passion for addressing climate change—they are why the organization is unique. We recently launched a series of interviews with our board members to hear their perspectives on climate change issues and why they are personally committed to addressing them. Below are excerpts from the interview with AMS Advisor Stephen M. Wolf. The full interview can be found here. 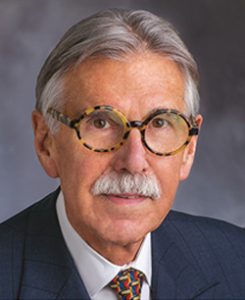 Stephen Wolf spent his career in commercial aviation, during which he worked for seven U.S. airlines and ran four. He began his career with American Airlines and rose to division vice president, followed by senior vice president of marketing at Pan Am; president of Continental Airlines; CEO of Republic Airlines, where he orchestrated its merger with Northwest Airlines; and chairman and CEO of Tiger International, the parent of the Flying Tiger cargo airline which he merged with Federal Express. Stephen was chairman and CEO of United Airlines for seven years and then served as chairman of U.S. Airways Group for seven years and chief executive officer for three of those seven years. He was also a senior advisor at Lazard Freres and was retained by the French government to restructure Air France. Since retiring, Stephen has held leadership and board positions at several companies, including chairman of R.R. Donnelley & Sons, board of director of the Fiat Chrysler Group and of Philip Morris International, managing partner of Alpilles, and chairman of Trilantic Capital Partners. A native of California, Stephen received a bachelor’s degree from San Francisco State University. He and his wife, Delores, live in Palm Beach, Fla.

I am an informed and ardent environmentalist. Aside from the environmental degradation by 330 million residents in the U.S., I have traveled the world extensively and noticed the negative impact of mankind everywhere. We have now effectively consumed well over 50 percent of the planet’s hard surface, which we further deteriorate daily. Clearly, a robust solution is necessary to ensure we do not claim more.

The consequences are devastating. For example, animal species are declining. In 1900, there were an estimated 500,000 rhinoceroses and 100,000 tigers on the plant; today, there are an estimate 29,000 1 2. Your background is quite different from most climate advocates. How does it shape 2 rhinos and 3,400 tigers. And in Africa, there was an estimated 10 million elephants and, today, there is an estimated 415,000.

2. Your background is quite different from most climate advocates. How does it shape your perspective on or approach to addressing the issue?

I spent my career in commercial aviation—worked for seven U.S. airlines and ran four. In the course of those managerial functions, I traveled the world trying to obtain new international routes, which was frequently quite complex. I met with endless government bodies, and out of my own personal curiosity, if time allowed, I always explored for a few days (or more) in the country. For example, in a very remote part of Borneo, I spent time with orangutans on the remaining portion of what had earlier been the land that they lived on. I have simply seen the devastation that mankind has created. And it continues to trouble me significantly.

To adequately address climate change with any degree of success, we need the largest oversight bodies possible—the United Nations, large countries, groups of countries—to collaborate with a degree of sincerity we have never yet seen on anything. We have to change from asking mankind to behave in a certain way. We have to require it. And, frankly, that change simply takes governments with that sort of authority. The private sector can be helpful because there are many large corporations in the world today that have leaders who are very concerned about climate change, either sincerely or because the cost effect it is going to have on the creation of their product. One of the examples most clearly visible today is automobile manufacturing. While automobile engines may be getting more powerful, the cubic displacement is continually getting smaller, so fuel burn will be diminished. And obviously, the ongoing extension of battery powered automobiles will have an enormous impact on air clarity.

First, I think U.S. leadership needs to display more of an activist role, which would then enable us to ask others to cooperate to reduce emissions. For example, China, with 1.3 billion people (only a billion more than us), has unlimited quantities of what is called “dirty coal.” It is effectively free within its borders, and thus an enormous percentage of electricity generating plants use “free” coal.

5. What is your advice for current corporate leaders as they consider addressing climate change?

I think there is a growing array of senior business leaders of very large, successful corporations in the United States who are becoming increasingly focused on the issue of climate change for two reasons. One is their fiduciary responsibility to their shareholders. They are trying to get ahead of it in terms of product change, which will become ever more demanded by society and ever more costly to undertake that task. And I believe they are sincere about it. They are also motivated by their children and grandchildren and the reality that the world in which they are going to live in is going to be very different.

What they need to do is form groupings, possibly standalone or centralized and other than The Business Council and existing organizations, among which they can strongly share their view in order to get others to join them. They are motivated to do so economically, and you could say selfishly, because they want competitive companies to bear the same cost change that they are bearing. And they are also quite sincere about trying to retain the world in which we currently live.

Frankly, I think it is going to be a disaster, a complete and total disaster. I personally believe, and hope that I am wrong, that we have passed the point of no return. I recently read an article about algae growth on ice in the artic, not to mention India produces 30 to 33 million pounds of plastic waste a day, much of which is thrown into the rivers and then goes into the ocean. There are simply just too many of us, and we take the planet for granted.

Despite my low level of optimism, I have an ounce of hope because environmentalists, like me, more and more business and industry leaders, and some policymakers are sincerely trying to address climate change.