An Interview with AMS Founder and Chairman Jeff Williams

The Alliance for Market Solutions (AMS) board of directors and board of advisors have diverse backgrounds but share a passion for addressing climate change—they are why the organization is unique. We recently launched a series of interviews with our board members to hear their perspectives on climate change issues and why they are personally committed to addressing them. Below are excerpts from the interview with AMS Founder and Chairman Jeff Williams. The full interview can be found here. 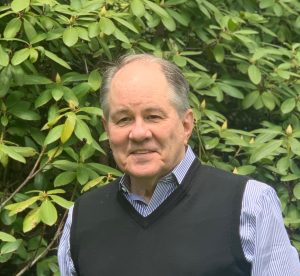 Jeff Williams is a founder and chairman of the AMS. He served as an investment banker for 34 years, first with Morgan Stanley. During his 17 years at Morgan Stanley, Jeff headed its global telecommunications group and was the principal financial architect of the break-up of AT&T. He then served as executive vice president of McGraw-Hill, a partner at Greenhill & Co., and founder of Jeffrey Williams & Co. In addition to serving as AMS chairman, Jeff served as the founding co-chairman of Environmental Defense Fund Action and as a director of the Center for Climate and Energy Solutions. He received a bachelor’s degree from the University of Cincinnati where he was a trustee of the university’s foundation and its chairman for six years. He also earned a master’s degree from Harvard University (with honors). He lives in New Canaan, Conn., with his wife and has two sons.

What influenced your commitment to addressing climate change and your interest in climate policy?

My engagement with the issue of climate change arose from a fundamental curiosity about the science of greenhouse gas emissions. It then evolved into a conviction that climate change is a truly existential issue, one that demands attention and commitment from all sectors of mankind.

What is the role of government in addressing the climate change? The private sector?

The issue of climate change is globally pervasive, and its implications reach every corner of the world’s natural environment, society, and economy. Its resolution demands broadly based attention from all of our national governments. They must establish constructive policy frameworks that respond to the issue from their countries’ perspective and then work together to integrate those country-specific approaches in a manner that is fair to each of the nations and promotes the highest level of market collaboration.

The private sector must acknowledge the science that informs us about the causes and effects of climate change and commit to aggressively reducing airborne carbon pollution that is a result of their activities that rely on hydrocarbons for fuel or as industrial commodities.

What is your advice for current corporate leaders in the financial sector as they consider addressing climate change?

The financial sector is not a central player in the creation of global airborne carbon pollution, in the sense that it does not find, extract, process, transport, distribute, or sell oil and gas, nor is it directly involved in using hydrocarbons to generate power or incorporate hydrocarbons in manufactured goods. However, the financial sector should insist that its customers, including businesses, nonprofit institutions, and governments, actively disclose and explain their exposure to activities that are directly involved in the creation of airborne carbon pollution.

You have met with several members of Congress to discuss climate change. What is your impression of how politicians are thinking about the issue? Their vision on climate policy?

What do you think the climate will be like in 2100?

I am confident that material steps toward the resolution of this issue will have occurred well before we reach 2100. In my vision of the “2100 future,” there will have been substantial steps taken to protect or defend seaside cities and communities from fast encroaching rising ocean levels and, for many of those same communities, increasingly frequent tropical storms and hurricanes. However, I am not confident that we will have done so before irreversible consequences of climate change have come to pass.